To celebrate, U.S. Representatives Grace Napolitano, D-El Monte, and Rodney Davis, RTaylorville, Illinois, have proposed a bill to create a commission that would recommend improvements and activities to commemorate the milestone.

The U.S. House of Representatives passed the bill, the “Route 66 Centennial Commission Act,” by a vote of 399-22 on Wednesday.

“Cities in my district have begun to re-invest in Route 66, recognizing its historic significance and how it continues to provide transportation, economic and community benefits to our region and American society today,” Napolitano said in a statement. “The federal government should be involved in these efforts as well.”

Napolitano authored a similar bill last Congress session that passed the House, but the bill died after the Senate never took it up.

While no one can say whether the Senate will put the bill to a vote this time, Napolitano hopes senators will see that Route 66 is important to more than just Los Angeles and Chicago, the congresswoman’s spokesman, Jerry O’Donnell, said.

The 2,448-mile Route 66 — which has been called the “Main Street of America” and the “Mother Road” — originally took drivers from Chicago through Missouri, Kansas, Oklahoma, Texas, New Mexico and Arizona before ending in Santa Monica.

Last year’s L.A. County Fair paid homage to Route 66 with its theme “Get Your Kicks … at the L.A. County Fair.” Mock versions of old gas stations marked each “neighborhood” of the fair, and all food vendors had $6.60 specials. 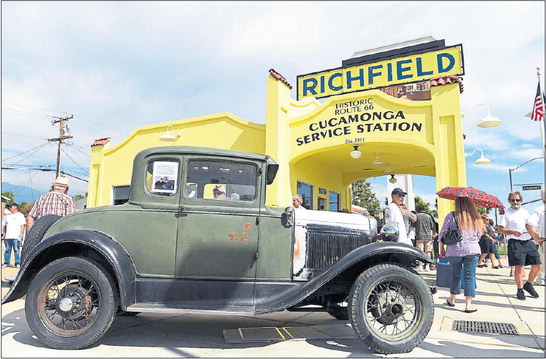 The Cucamonga Service Station in Rancho Cucamonga, which houses a Route 66museum. U.S. Rep. Grace Napolitano, D-El Monte, proposed a bill to create a commission that would recommend improvements and activities to celebrate Route 66 turning 100. The House passed the bill.

Click here to see this page in the eEdition: